An American Climber in France

After a nearly six year hiatus from climbing, the mountains called me back and I made my way to Grenoble, France where I currently reside. When I climbed in U.S. I was mostly a gym rat and only made a few ventures outside, so this time around I was hell-bent on being an outdoor climber. As soon as I arrived in Grenoble I started climbing, at first on top rope but within a few months I was learning how to lead sport and multi-pitch climbs (in French, no less). In March of this year I participated in a Red Rock Rendezvous (RRR) event where I was re-immersed into the American climbing scene. And since, I’ve had American climbing pals join me in France. Now having climbed on both sides of the pond I have observed some stark differences in the climbing communities in France and U.S., from gear to how we communicate and our general climbing philosophy.

First things first, in terms of gear, I would say all climbers have the same get-up. But there is one glaring difference I have noticed regarding PASs. I have seen Americans use a lot of things from daisy chains to slings for their PAS, but the French have one system; a 2 meter piece of cord. Tie a locking carabiner to one end and a figure eight to your harness and voilà! You have a PAS that will run you about 3 EUR! The length is easy to modify and did I mention the 3 EUR? It is probably the cheapest piece of climbing gear you can own besides chalk (and even that is getting fancy these days). 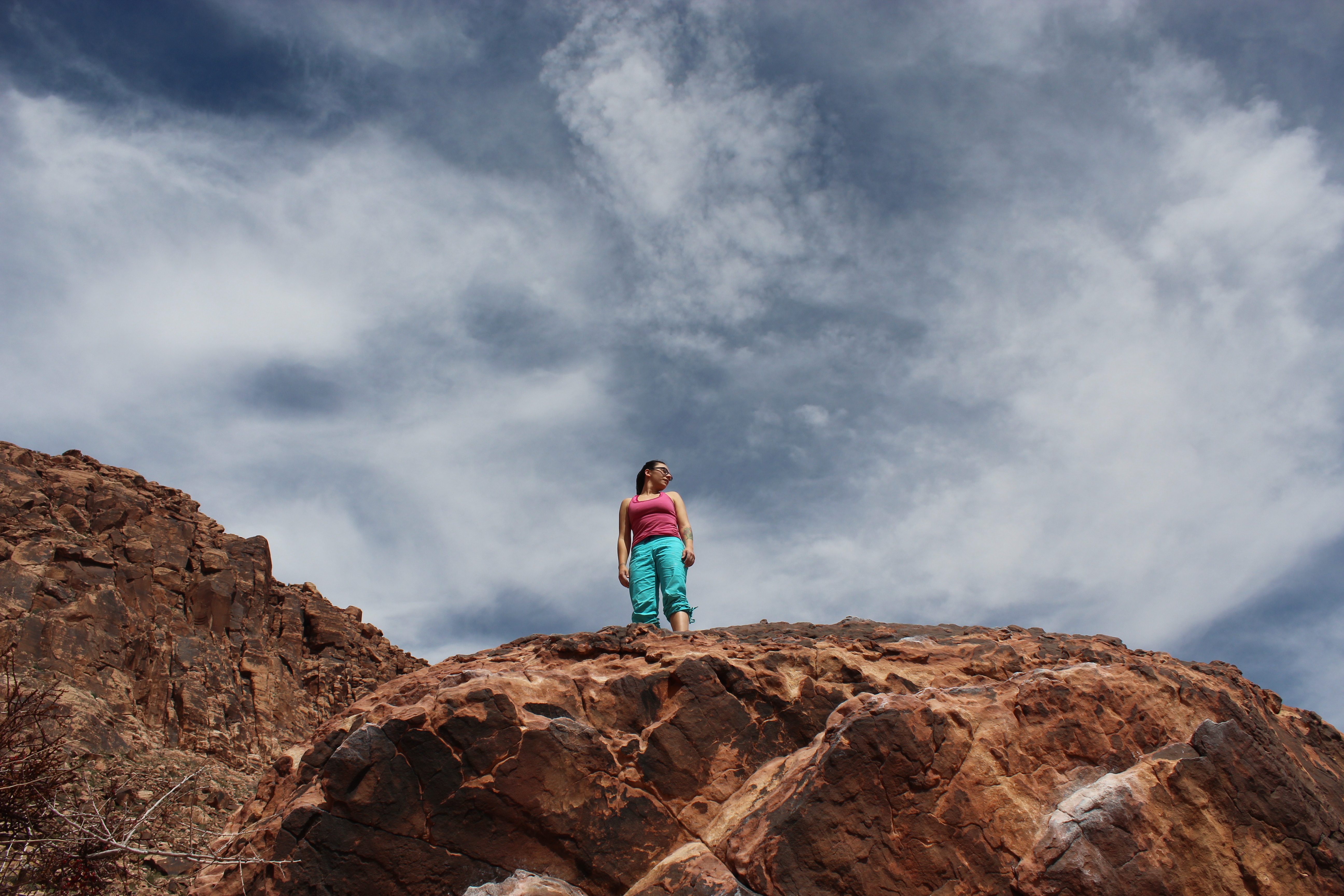 When I returned to U.S for RRR I stopped off at Kraft Boulders before the party started and I was actually shocked at how many people came over to talk to me about what I was climbing, asking where I was from, and even asking to share my boulder mat. I felt like an alien. Who were these people and why were they trying to communicate with me?! It’s not to say that the French aren’t polite, they will greet you and even ask to take a peak at your topo every now and then, but there is certainly a friendlier ambiance at an American crag.

Now there is something to be said for the less chattiness at the French crags. To their credit, the French are much more efficient communicators when climbing. On a sport climb I would wager that the French use, on average, about five or six words to communicate during a climb:

And maybe if you are struggling at a crux you will get an “Allez!” Which roughly translates to “Suck it up and go already!” This is quite contrary to how I have observed Americans climbing, that is, giving commands multiple times and talking a lot throughout the climb, talking to other people while belaying etc.

I am sure I am generalizing here, but after spending two years in France I see a pretty common trend in the climbing mentality- climb for the grade! Grenoble is a climbing city, with a population of only roughly 155,000 and we have five climbing gyms here. And since sport climbing is our drug of choice, the philosophy of climbing tends to lean towards improving grades, and rapidly! In Grenoble I am still considered to be a novice climber. The average climber here climbs around 6c (5.11a), and when a climber says they can climb 6c what they are really saying is “I climb this grade flawlessly.” They have “working” grades and this is where you see them struggle or fall. But the bar is set high and people progress rapidly. Although I should note, we are at an advantage here as you can get to a handful of crags by bike in less than 15 minutes.

This is different from the approach I see in Americans. Americans are mostly happy to climb anything and satisfied to climb on top rope, whereas some French would even say lead climbing is the only real climbing, anything else doesn’t count. American climbers are far more relaxed at the crag, as if they have all the time in the world. French climbers, on the other hand, climb like the mountain is eroding in front of them and will be gone by sunset. I think the contrast in the mental approach is directly related to the fact that France is more-or-less the land of sport climbing and the U.S is the land of trad.

This may be the most obvious difference between climbing in France and U.S. Americans are purists, while in France, sport climbing is the name of the game. (Although to be fair on routes that were equipped long ago by alpinists you can still find some nice run outs that will get your heart racing.) But overall, the French love bolts. And I think the American climbing community could actually benefit from embracing sport climbing a little more. I have found that many American climbers have less lead climbing experience (or in some cases none) compared to French climbers.

When I ask Americans why, they always respond that they only have access to trad routes where they live and they are not ready for leading trad routes. I, of course, understand this- trad is fricking scary! I rarely lead trad or partially equipped routes. I took a trip to the Peaks District in northern UK this year and I got a taste of trad, and I found it completely humbling. You could say it knocked my lead climbing grade down a peg.. or five. But I did have a lot of confidence on the climbs I went for, and I attribute that to my experience leading sport routes. Leading sport routes builds your strength as well as your confidence and gives you the chance to push yourself a bit more, since it’s nicer to take a fall on a bolt rather than a cam.

So why are American still clinging to the belief that trad is the “true spirit” of climbing? Other than not liking the aesthetics there isn’t a really good reason not to drill a bolt here and there. No, it’s not natural, but rock isn’t a living creature and putting a few bolts wont make a wall erode faster. I am not proposing to drill a bolt ever meter up a 35 m pitch, but there has to be some happy medium.

So you might be asking yourself where all of this leaves me. Does she climb like the French or Americans? Well, I guess I can best describe myself as a hybrid- a crag junky mutt of sorts. I take what I like best from both worlds and apply it to my own personal climbing style and philosophies. My heart lies with sport climbing so I favor the French’s love of bolts, but I am also a rather social creature and appreciate non-climbing related chit-chat (and nice long mid-climb siestas).

And I know I have made generalizations on both sides, don’t take it personally. I am sure you have some friends that don’t fit in with my profile of French or American climbers. I am just throwing out some of my own personal observations in this little anthropology experiment I call life. 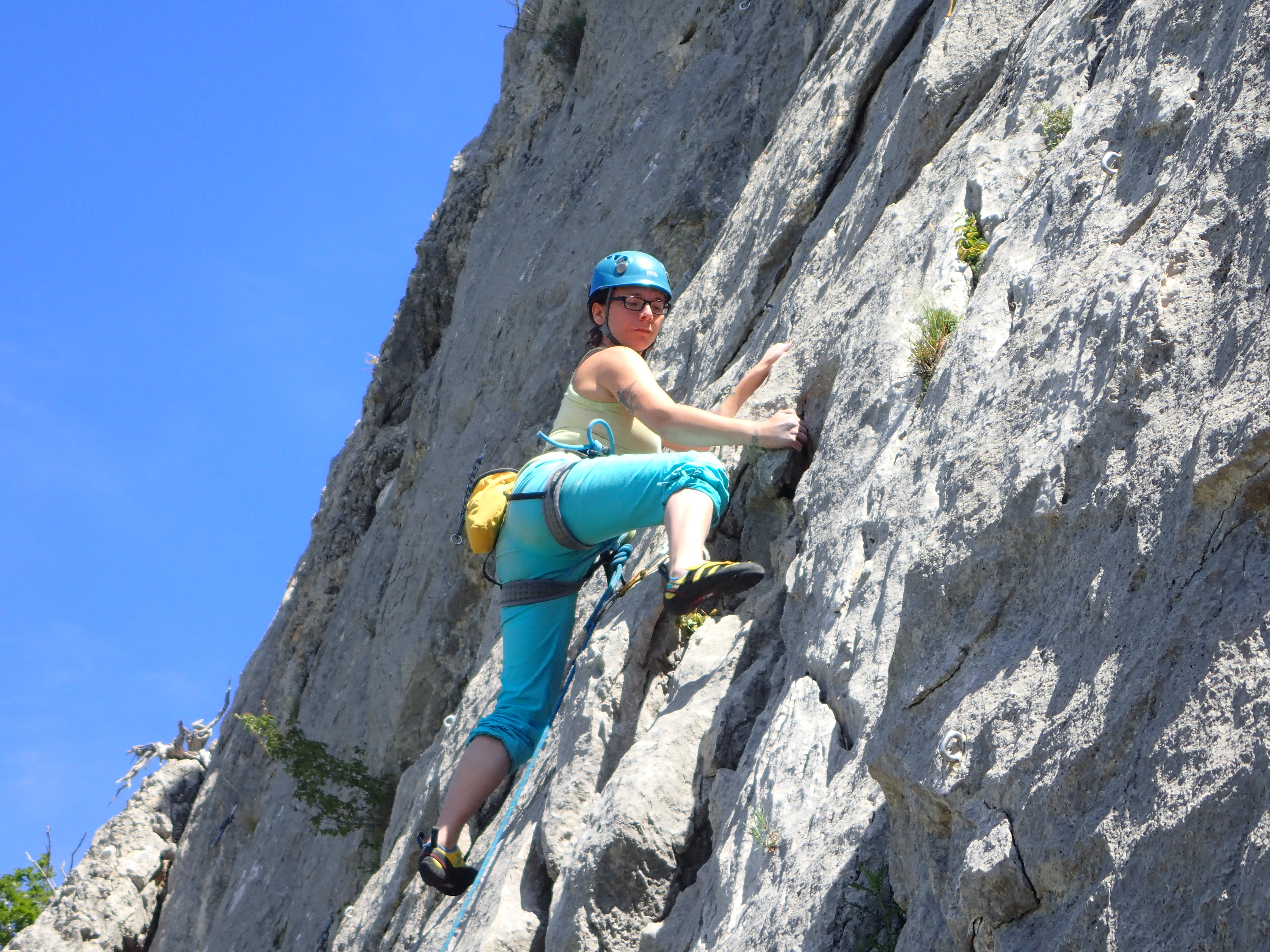