I just could not face the prospect of seeing in one more New Year doing exactly the same thing as I had been doing for the last 10 years – i.e. standing in an overcrowded bar, counting down to midnight, and being hugged by random strangers when the clock stuck twelve.

The day before New Year’s Eve, a colleague and I bumped into a friend of a friend at the mall and he and his wife were climbers. They invited us to join them, out in the desert of Oman, for a weekend of sport climbing. At this point I had never climbed before, I didn’t know any of the people, and I didn’t have any climbing gear. In short – I knew nothing of what to expect. Quickly I went to the local sports store and bought a harness, some climbing shoes, and a chalk bag (but no chalk).

The following day, early on New Years Eve, the two of us drove four hours out into the desert, across the boarder into Oman, to meet the other climbers.

The directions to the crag were sketchy to say the least, consisting of instructions such as ‘drive at 60mph for one hour and turn left at the big red sand dune’ and ‘after 6.3 miles you will see a teapot on your left – then turn right’. Somehow, we managed to find the crag, called the ‘Wonderwall” which was (in hindsight) a surprisingly solid vertical wall surrounded by miles of endless choss.

The group of climbers were clearly quite accomplished, trained hard, and had years of experience. I did not fit in with my brand new gear, complete with all the store tags, and my empty chalk bag.

Nobody spoke to me at first – apart from one guy who let me know that I had the harness on upside down.

A few top ropes were set up and I managed to send all the routes no problem. I was hooked on climbing from day one.

The climbing in Oman is sharp and abrasive limestone. There is a good mix of routes and a guidebook has been published called UAE Rock Climbing (2009) for anyone who finds themselves in Dubai with some time to climb.

After I discovered climbing, I realized there were very few opportunities to get out and climb in Dubai. The climbing community was extremely small – and I wasn’t climbing at the level of the established climbers. There was one climbing gym, fixed to the outside an apartment building with about five top-ropes and holds that were rarely re-set. Also, given the temperatures and humidity in Dubai, the holds were permanently sweaty and greasy – but I thought it was great and went as often as I could.

During the summer of 2011, when it was too hot to climb inland, a group of us would hire a boat and go deep water soloing.

Deep water soloing was the first time that I had ever climbed at my limit and it was exhilarating – but definitely type-two fun for me. When I was deposited onto the holds at the base of the climb, the boat would pull away and I was on my own. In this situation the options are few, either climb hard and make it to the top of the route, where there would be a small ledge for a nice, controlled, jump off into the water – or alternatively – falling off backwards half way up a route trying not to land awkwardly but equally trying to push away from the wall.

Falling off backwards was not an option for me – I don’t have those cat-like reflexes. I would do anything to top out the route. Even if I thought the next move was impossible, I could not bring myself to let go. Never have I climbed so well – either before or since. DWS-ing brought out this inner focus and determination in me I have never experienced climbing on a rope.

I left Dubai in June 2012, but on my last weekend I decided to go on a trip this new remote climbing spot that had been developed.

We climbed all day. I top roped other people’s routes and, feeling brave, I decided to try lead climbing a route for the first time. It was a 5.10(a) slab that transitioned into a face climb with a slight overhanging bulge at the top. I climbed the slab without issue and was working my way up the face when either something broke or I lost my grip. I took a fall and found myself hanging on the end of the rope with a very deep, perfectly linear, horizontal laceration across my left ankle. Blood was pouring from my foot and I began to feel woozy and was coming in and out of consciousness.

The crag we were climbing at was extremely remote – miles from anywhere. The three guys I was climbing with strapped up my foot with climbing tape and carried me through a wadi, scrambling over huge boulders, to get me back to the car and to a hospital. When we got to the hospital, a hut in a small village, the Doctor stitched up my foot using Frankenstein-esq stitching and no anesthetic. Yes it was painful.

Oman is a Muslim country so  also we faced some interesting questions as to what three topless sweaty guys were doing alone in the desert with an injured woman.

Some shocking stitches and a bloody shoe.

To this day I have no idea what cut my ankle so incredibly deeply. Maybe it was a sharp rock or an unfortunate encounter with a bolt hanger on the way down.

My flight home was the following day and I hobbled to the airport with more suitcases than I would have been able to carry with a fully functioning leg. I got back to England and sat on the sofa in my mum’s house for the best part of two months. However, with stretching, physio, and hours spent gently bouncing up and down on a mini-trampoline, I was getting better. Within three months I was back at the gym and within four months I was climbing again.

After my ankle injury healed I moved to San Diego, California, and my steep climbing learning curve continues. 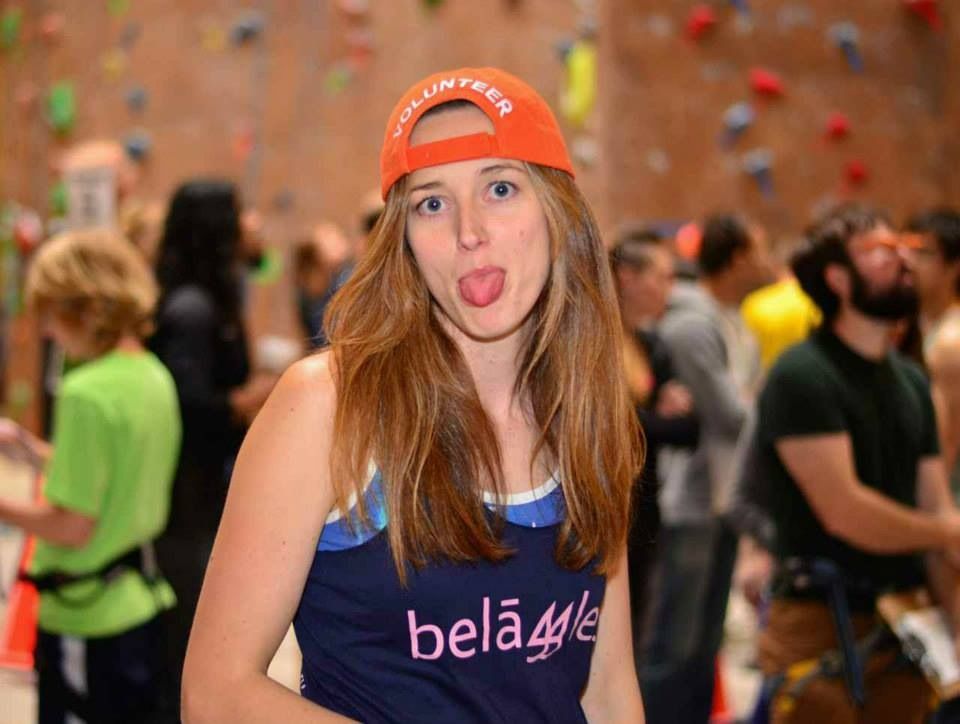