Hello, my name is Jennifer and I am a single mother to Hannah a 12 year old climber!

I didn’t know what was going on, but was told that I had some abnormal cells. I ended up having to have an emergency Hysterectomy.

This surgery was a struggle for me, because I am a former Police Officer and have always maintained my fitness levels. Up to time I had surgery, I gained 35 pounds and this put me in a very low spot. I did not feel like doing much of anything!

My doctor released me 3 weeks after surgery because I was in good shape but absolutely could not sit still… I started running everyday. I was determined to lose weight to fit back in my clothes.

So, I decided to run a 5K. The night after the 5K, my shins were swollen and in pain. I decided once again to go to the doctor and the doctor told me I was suffering from shin splints. The doctor advised me that they would go away and to continue running. One week later, I went back to the doctor because my shins were extremely blue and swollen. So swollen they were about an inch from my skin. 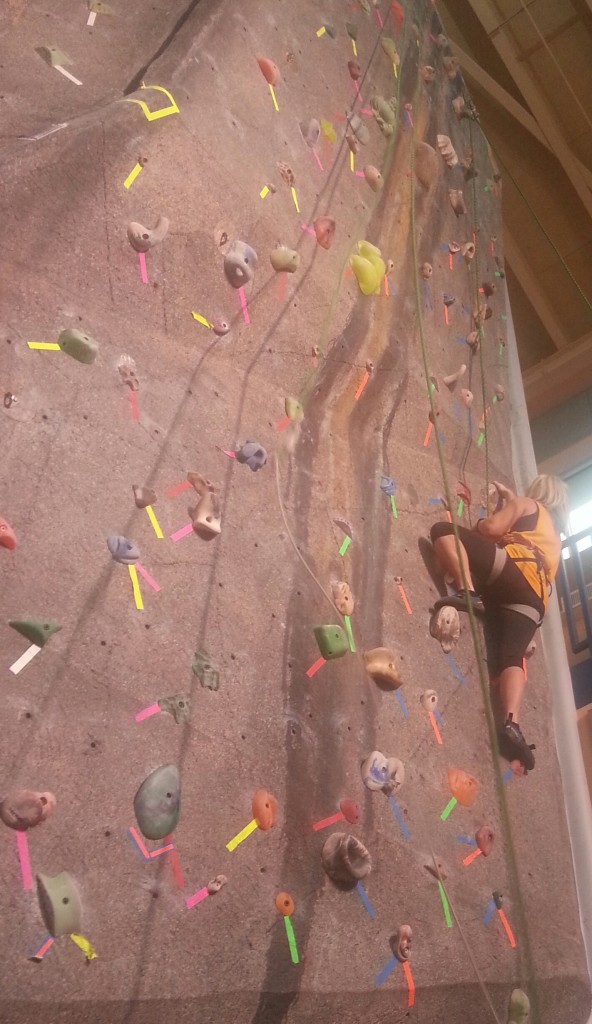 After another week, I was finally informed that my shins were not hurting because of shin splints, rather I had a fracture in two places and also tendonitis in my ankle. From here, I went into physical therapy without much change in my condition. At this point, my doctor told me I would likely never run again or do anything that would put pressure on my body.

Nothing was helping. Then, I found rock climbing.

A friend of mine started climbing and invited me to join. I was very scared the first time I tried rock climbing. There is a lot of trust involved in climbing – I felt like I was putting my life in the hands of someone else completely, but I persisted. I would try my first attempts at climbing and make it about half way up the route before I had to stop because of muscle fatigue.

I watched the young girls climb with such grace and angelic movement. I was determined to get farther. I was sore all over from climbing but smiled because when I began to climb my worries faded away and I felt joy.

I didn’t think about anything else but where I was going put my hands and my feet. My second climb, I climbed a little bit further. While I hadn’t made it to the top, I felt proud to be able to pass my first mark.

Spring was here and they opened the 80ft tower outside. A young tall female belayed me and encouraged me as I moved. She told me to rock from side to side and move and up to the top I stood and felt so much strength! I felt no pain and I was in awe!

After I had been climbing for a little while, I had to go back in for a check up. The doctor told me he was amazed with the recovery.

My injury apparently had subsided and my legs had strengthened! Who would have thought?

At this point, I knew what my passion would be.

A journey begins with one step. I KNEW climbing now was true passion… I wanted to climb farther, learn from others and hope to inspire just one person, to say “I CAN!…BELIEVE…Don’t EVER GIVE UP!!”

My climbing adventures have predominately been indoor, until recently. On March 15, I climbing at the Red River Gorge in Kentucky with a pro!  This is the beginning of what may come next.

Tis true that it is never too late to learn and at 40 I wish I would have tried this years ago.

I never thought Id be practicing tying figure 8 knots not only to try to master it but also for fun…:-)