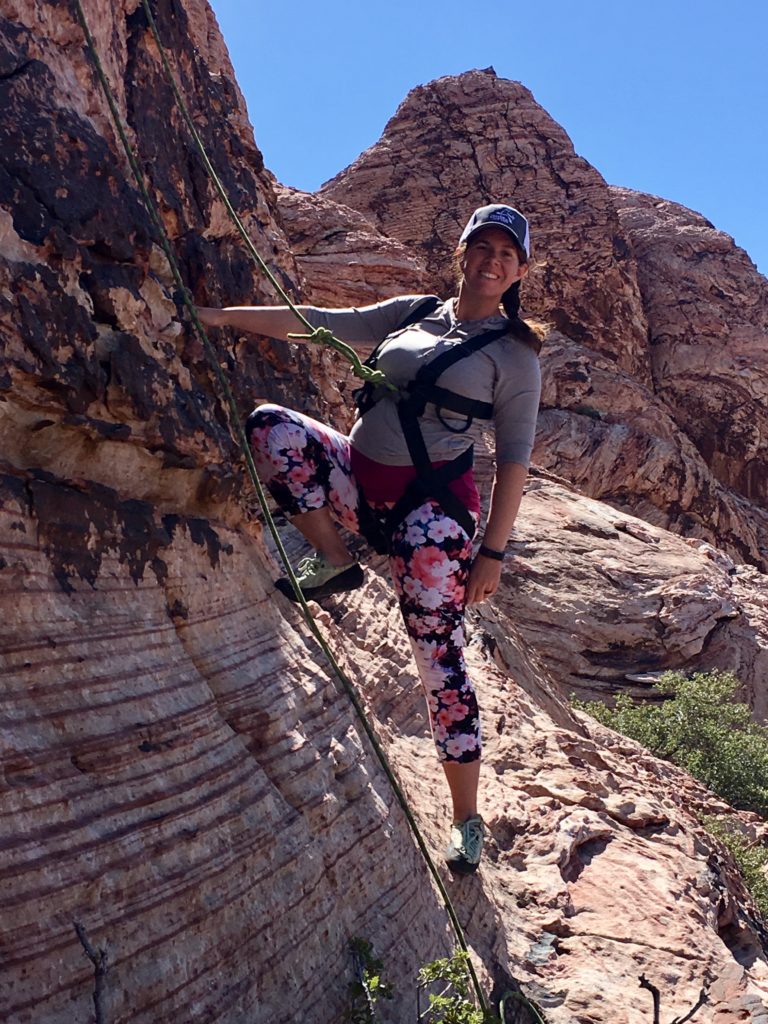 I consider myself a climber in the core of my being, although I’m not particularly strong, skilled or prolific. I feel most myself when I have sandstone grit in my fingernails and hear the windchime call of gear on my harness. But this past year a new identity lodged into the core of my being: mom. Full time working mom. Finding the balance between my job, my infant son, and the person I’ve always thought I was has been one of the most difficult challenges yet. I found myself without beta and full of paradoxes, especially feeling deeply isolated although literally never alone.  So, I wanted to share just a quick glimpse of my own experience, in hopes that it might inspire, console, or reassure other new moms out there right now, who may be feeling like they “used to be” a climber.

I had been extremely proud to climb all the way into my third trimester until the desert summer heat caught up with my swollen belly and the doctor firmly told me to sit down and stay cool. So I told myself to treat myself, put those feet and pump up the ac. Relax, I told myself, the baby would be here in a few weeks and then I’d be climbing again.

This turned out to be partially true. Baby did arrive in a few weeks. Exactly on his due date, he took the more adventurous route, and I found myself with 37 staples in my belly and a perfectly formed grump raisin in my arms. I was given permission to resume regular activities including climbing after five weeks, with firm cautions to be very careful. No further elaboration, just be very careful. I couldn’t wait to feel like myself again, (but carefully.) So excitedly (and very carefully), I sat down to look up articles on how to climb after pregnancy. There had been books, blogs, and specialty gear all catering to pregnant climbers, but post-partum how to’s and pro-tips just hadn’t delivered. And so the winging it began.

With baby safely tucked away at his grandma’s house, my husband and I decided to a test run a climb at the local gym. I was already living in leggings as they felt the most comfy on my new kangaroo pouch belly, and like welcoming an old friend I shimmied my harness up my hips. It took just a few seconds to realize my mistake—the waistband of my harness would be resting right against the incision from my c-section. 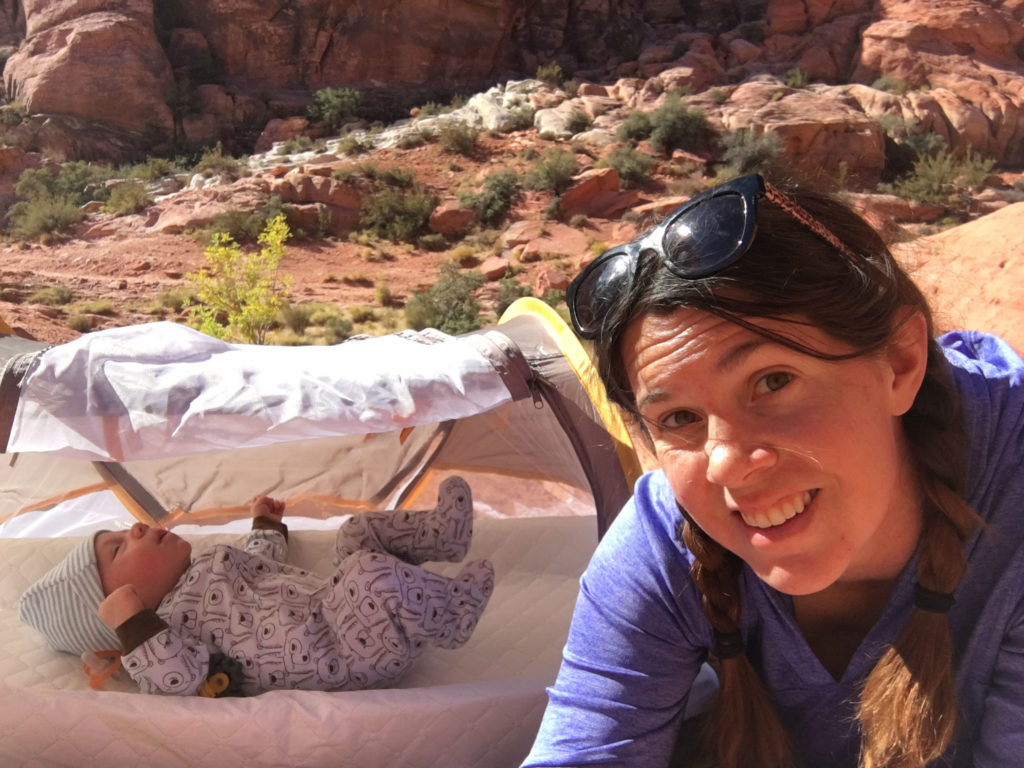 How I handled the situation: Cried. I’m going to be honest, that was both baby’s and my response to most things those early months.

Yeah, but once the crying is over: A full body harness, such as pregnant climbers are encouraged to wear, will wrap around not against your body giving the incision time to heal. Mine is a small Petzl men’s full body harness which I selected after careful research and also it was the only one I could find. Unfortunately, I had already donated said harness to a friend who was beginning her own journey. Bouldering was too much risk for reopening the wound and too much core work could stress those healing abs so my solution was traversing, which I could do without a harness and just hella easy routes on a tight belay. The tight belay pulled the harness away from my skin and the easy routes allowed me to feel like I was Doing The Thing.  I felt briefly like a climber again without stress to my healing body or mind.

Then, of course, there was the reverse Cinderella of my climbing shoes. Did you know that with each clutch of eggs, the abdomen of the queen bee becomes irreversibly elongated? I believe the same is true of human women’s feet. At least mine are a full two sizes larger and no signs of a post-partum shrink ray.

How I handled the situation: Cried, duh.

Yeah, but once the crying is over: I fortunately had a pair of stretchy leather shoes that I had bought too big on purpose to be comfy on all day trad adventures. (The ubiquitously minty Sportiva Mythos if you’re taking notes.) I could just barely jam my new mommy-sized thumpers into them, and decided to act like I had deliberately sized them to be more aggressive. So, try your shoes on before you get where you’re going, rent or buy bigger ones if you need.

After a few rounds of timid routes, and a few rounds of ibuprofen that I could finally take again, with a thin veneer of confidence we decided it was time to take this show on the road and try an outdoor climb. The next week we loaded up some barrels of salted pork, wooly long johns for the harsh prairie winter, and packed for the Oregon Trail. Or a simple nearby crag. Hard to tell the difference based on the sheer amount of climbing gear and baby gear we jammed into our packs.

The baby was not particularly interested in the beautiful crisp air or majestic view of the mountains. He was very interested in drinking milk and sleeping. His pack got slightly sweaty, his mom got very sweaty. It took a while to find a place to pitch his new Kilofly pop-up, better known as the adventure tent, that wouldn’t send him rolling down the slope like a chubby tumbleweed, and once our hands were rope blackened and sandy it took nearly all the hand sanitizer we had before picking him up again.

How long it took: All damn day
What we climbed: One pitch

It’s a new debate to be entered into our planning, a round and round every weekend that often ends in deciding to just stay home. When it used to be just sport or trad, it’s now baby or sitter? If we bring him along there’s work, risk, a constant nagging need to look down that has nothing to do with finding a foothold. There’s the passing judgement of random hikers. There’s the constant packing, unpacking, and double the gear. There’s diapers in the rope bag. If we leave him behind, then he’s left behind and as a working mom I already have enough guilt that he’s being left behind. And sitters ain’t cheap.

How I handled it: cried about it

Yeah, but once the crying stopped: Lol, it hasn’t stopped. This is the crux of my new life: how to be me I’ve always been and the mom I want to be. Hiking helps. It’s easy to bring him along and still feel like the active outdoorsy parent you/I want to be. Knowing he’s mostly napping helps, even if it does make one envious. For me, knowing it’s good for our marriage to spend time away from baby doing something together we both love helps the most. And like all things, time helps. The rocks aren’t going anywhere. This will pass and a new and grand adventure is out there. For the whole family. You were a climber, you are a climber, and you will be one again. 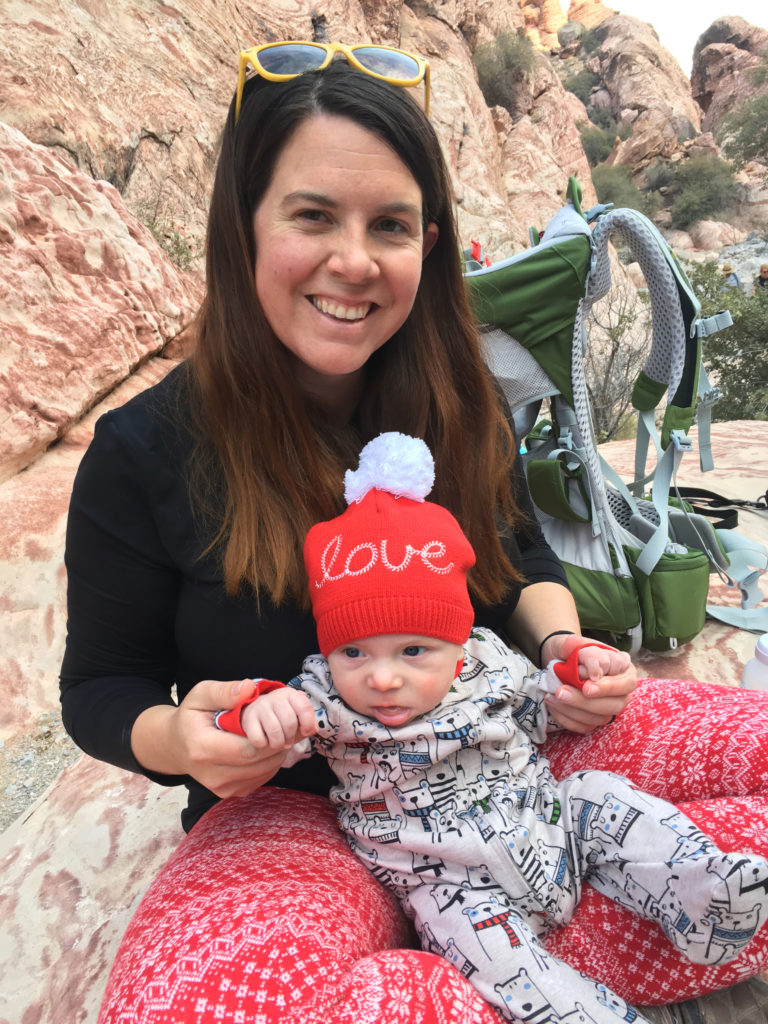 Previous reading
From Beginner to Big Wall: Chasing Dreams in Brazil (Part 1)
Next reading
Wrapping my head around being a mom…