In celebration of Valentine’s Day, we asked members of our Rock Climbing Women Facebook Group to share their stories of how they found love on the rocks. Here’s what Sarah, Laurie, and Lynda had to say. Thank you, ladies! 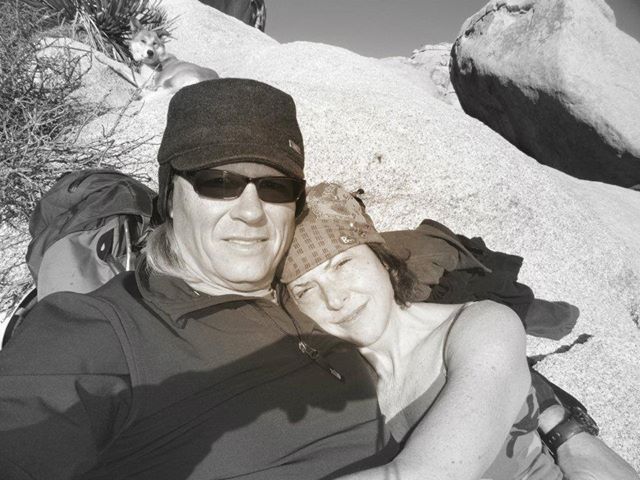 SARAH: It’s a funny story how we met. I was planning to move to Vegas for a while and so to prepare, I had posted in a climbing forum online. I was looking for some climbing friends and just wanted to put that out there. I had a number of responses, including one from my future significant other.

Months pass by and I forgot about my post and responses. I was out with a new coworker bouldering in Calico Basin at Monkey Bars. My coworker’s brother showed up with his friends because it had started to rain a bit and their trad plans were canceled. While we were hanging out, trad climbs work their way into the conversation.

Apparently, there are some Harry Potter named climbs at Red Rock, which caught my attention because I am a huge fan. Then one of the guys asks me, “Wait, you just moved here? And you like Harry Potter? Do you go on this online climbing forum?” In some miraculous-all-at-once moment, he realizes who I was and that we had talked four months prior online. We both nerd out in our own little universe about the forum, climbing, and Harry Potter. From there, it is history. I found my climbing partner and significant other all at once.

LAURIE: Nick and I met when we both still lived in Virginia. Our home gym was a very closely knit community–it’s actually crazy that it took us as long as it did to meet since we had all the same friends and were both climbing nearly every night. One day my partner bailed on me so I wandered over to say hi to another friend that was climbing with Nick, who at the time had a “training” beard that was….very intense.

The first thing he ever said to me was a Jurassic Park joke, and the only thing I love more than climbing is dinosaurs. We started climbing together immediately and were perfectly matched as climbing partners. And I remember the day he finally shaved that beard, I spotted him across the room and whispered “who’s that guy” to the girl at the front desk. He looked damn good.

It actually turns out none of our friends/community even knew we were dating until we moved out to Nevada. I guess they thought we were just really really into climbing together. We got married last July and tied a figure 8 into our climbing rope as part of the ceremony. (Don’t print that it’s a figure 8 though, he’ll definitely correct me that it’s a flemish bend.)

LYNDA: I started rock climbing in December 2008 right after I turned 50 years old. A friend told me about a guy who was organizing climbing meetups–his name was Dan Young. I heard he was a pretty good climber, so I looked up his picture and was immediately attracted to his rugged good looks. During Christmas break of 2009, I was climbing at Panty Wall with my daughter. I looked down the line and there he was belaying a climber on Edible Panties. I walked up to him and introduced myself then he belayed me as I climbed the route.

We ran into each other again at John Cutters and I found out that he gave intro classes for trad and to look for his next class on meetup. My daughter and I signed up and attended his class at Physical Graffiti. I was very impressed with his teaching abilities. I also was beginning to fall for this very charming guy. After that, I hired Dan to give me a class doing a mock trad lead at Physical Graffiti. That’s when I sensed Dan may be attracted me and we began to communicate more on Facebook.

In March of 2010 Dan invited me to climb Birdland with him. When we were at the top, he put his arm around me and gave me a kiss. This started our love affair. Dan moved in with me 3 years ago and we recently became engaged. 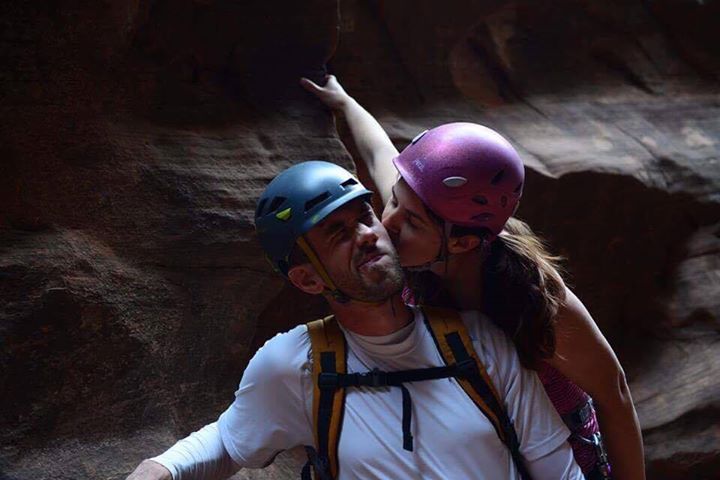 What’s great about being partners in climbing and in love?

SARAH: For me personally, climbing together can be therapeutic. Climbing with someone that you’re with is an amazing feeling. The connection of trust is most important while climbing and to share that with someone who, at the end of the day, you go home with is comforting. You build your relationship more with each climb. To encourage each other beyond each hold, to know your partner has your best interest at heart, and to have someone to push you outside your comfort zone makes you a better partner in all aspects.

LAURIE: It’s a really easy transition from climbing partner to romantic partner which is one of the great things about it. You already have a huge amount of trust built into the relationship. You don’t have to worry about putting your heart in someone’s hands if you already put your life in his hands on the regular. You’re also used to communicating your needs clearly and constantly, although you don’t have to yell them when you’re just at home.

LYNDA: The best thing about having a boyfriend who also is a climber is the obvious. We both share the same passion. We understand each others need to be outside. We talk the same language. We encourage and challenge each other. The best times I have is climbing with him. He is my best friend and my favorite partner. 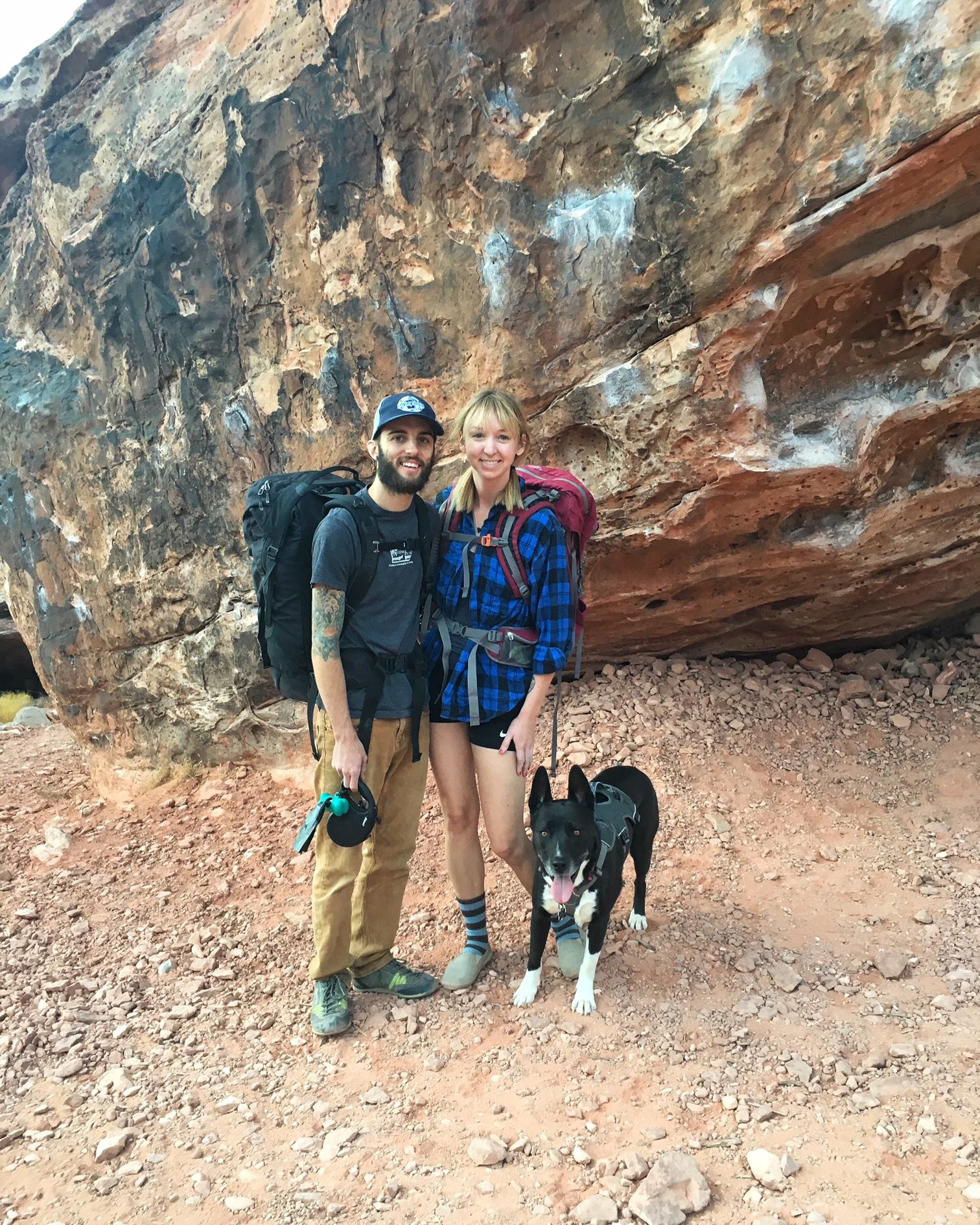 What are some of the challenges you’ve faced?

SARAH: A challenge we faced early on was learning and teaching each other. He was more experienced than I was in climbing, so I had to learn a lot from him. When you love someone, you just want to help them the best you can. Unfortunately, sometimes that results in frustrations when one or the other doesn’t understand or prefers other methods to their teacher.

Mike, for example, has an adjustable PAS (personal anchor system) that he prefers to use. I felt unsafe using that and decided to use a PAS with links. It came down to preference but it caused a frustration because he saw no difference between the two. A silly argument but it is one to take seriously. If your partner ever feels unsafe, scared, or uncomfortable- listen to them.

LAURIE: For us, the downside has become pushing each other to reach new goals. When we were young and unattached we were always pressing the other to go harder and go higher. Now, when Nick is projecting something and he needs encouragement or he’s struggling, my first thought is “whatifhefallswhatifhefallswhatifhefalls.” I can’t bear the idea that he might get hurt, which is part of the risk of climbing, but I know that he needs my support as a wife and as a belayer so we both have to know what our limits are, and sometimes as much as I love him he just needs to climb with someone else, at least until he gets that move dialed in.

LYNDA: The challenges we have faced is not being able to climb together as much as we would like. He is a climbing guide so his weekends are booked climbing with other people. This has actually been a problem at times because I feel alone. The other challenge is my feeling of inadequacy because he is a much better climber than me.

We have made some changes which have helped. Dan commits to one weekend a month for him and I. 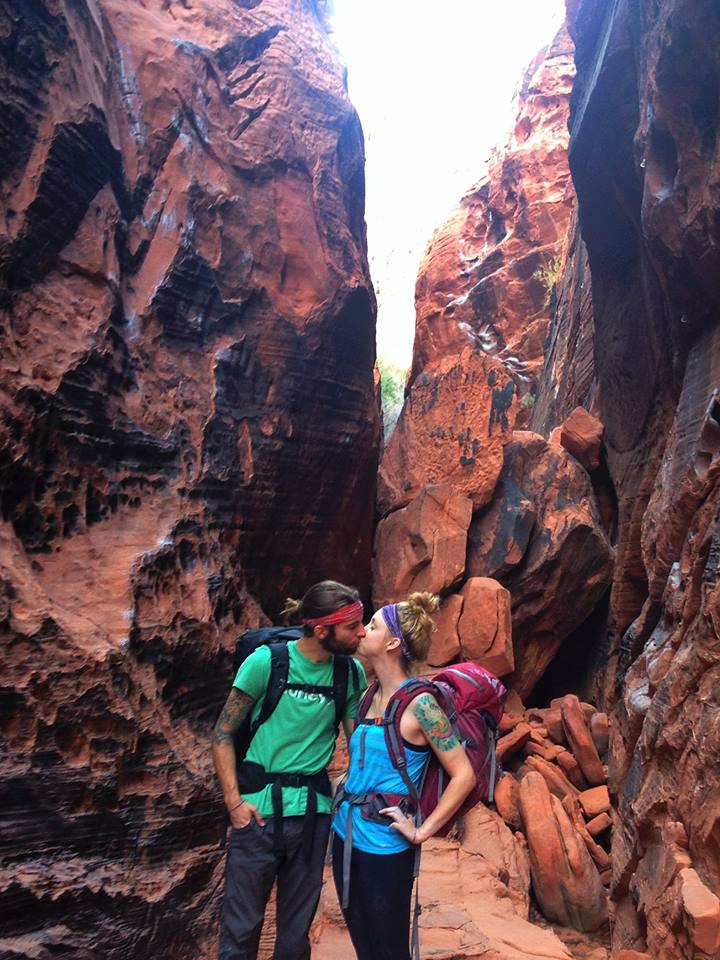 What advice would you give to other climber singles who want to find love at the crag/gym?

SARAH: Don’t force it. If it happens, it happens. If you’re devoting yourself enough to a hobby or sport, it’s likely you’ll attract and find others who have that same passion.

LYNDA: Live your passion and have your rock climbing friends. They are your support and understand why you climb. You may or may not find the man of your dreams with another climber, so I suggest you have other passions beside climbing.

I could not be with a man who did not have the same outdoor lifestyle as I do. Dan and I not only climb together but also mountain bike together now and that has opened up a brand new life. In our years together we have climbed, hiked, backpacked and mountain biked. Our lives are not just based on climbing together. Having more in common than climbing is important.

Anything else you’re dying to tell us about your love story?

SARAH: One of the best things about having a significant other who climbs, is that your ideal vacations line up. Because we are both on the same page when it comes to adventure and exploration, we agree easily on vacation spots like Yosemite, Thailand, or Spain. It’s a huge positive, but remember to be courteous of your partner–not every vacation has to be an intense adventure. Sometimes a relaxing vacation is okay too!

LAURIE: There are people who like to climb and there are people who are in their very heart of hearts climbers, and your skill set doesn’t define which one you are, your attitude about climbing and your need to have “hands on rock” (as Nick and I call it) does. And if you ARE a climber and your idea of a good day is to get up before the sun, haul heavy packs through sand, scrub, and cactus…struggle up a mountain with your toes jammed into too-small shoes, break all your nails and other beautiful miseries and then to traipse back in the dark after the sun has already quit! …then you need someone who understands that, or at least will listen to your play-by-play of each move you made which sounds like a play-by-play of every other climb and knows the vocabulary.

LYNDA: Don’t put your eggs in all the same basket. The man of your dreams could be a hiker and you could open up the world of climbing to him.